Let’s just jump right to it, ‘Better Call Saul Is Brilliant.’ I am putting it out there and dare anyone to refute it.

From the opening frames of Saul, (Bob Odenkirk), kneading Cinabon dough, feeling extremely paranoid behind the counter, we are taken to present day, a bland colorless existence. Saul has “survived” his ordeal and gone into witness relocation, but there is absolutely nothing of this new life for him. Instead, he teeters at the edge of the precipice of drabness. He cannot even mix a decent drink while he watches late night television in an apartment with nothing in it. 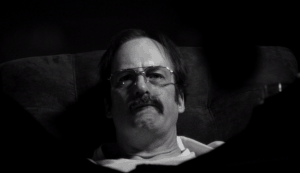 Constantly looking over his shoulder, wearing no hairpiece and a pathetic mustache, he is, to quote Henry from Goodfellas, “living life like a shnook”.

He rumages through what was left of his past life in a treasured shoebox in the back closet. It is a video tape, (VHS no less) which he pops into a VCR. As he watches it, we see nothing, except his empty souless eyes reflecting outwards as the voiceover of those commercials screams triumphantly in the background. He can do nothing except ponder the waste that his life is now and will be going forward. There is literally nothing for him.

These are the opening minutes of “Uno”, the first episode of Better Call Saul, and you know, as you did with Breaking Bad, that you are watching something special, something to be treasured. To be honest, I had little expectations of this show from the get go. The idea of an entire of Saul everyweek seemed to be riddled with problems and I was sure that disappointment lay ahead.

In this case, I love to be proven wrong. By all accounts, BCS is headed towards another winner. Bob Odenkirk has always been a brilliant comedian and even better actor. His stint on the netflix version of Fargo as the dim-witted sheriff was just a taste of what he is really capable of. You get the sense of tremendous pathos behind the characters that he plays. He excels at making the viewer feel sympathetic and uncomfortable at the same time.

Without revealing anything else, I can honestly say you “Better Watch Saul”. Cheers to Vince Gillian for once again saving cable television from inept and shallow programming.