Mother! The hit you on the head creationist story. Well, sometimes you want to see something a bit different, and you appreciate it when an auteur of cinema decides that he is going to try something new. I didn’t have any hopes that mother would be right. We will start with the title itself; it does not need an exclamation point. Mr. Aronofsky, we know it is going to be shocking, you don’t need to warn us. The film is mostly like this, self-explanatory symbols and names telegraphed to you from across the screen. Mother is mother earth, the baby is the god, man and woman show up and they good into the forbidden garden of Eden, a room in the house they are not supposed to enter, and they break a glass “heart” on a stand. If it isn’t obvious at that point what the story is about, then you need to read you bible, my friends. 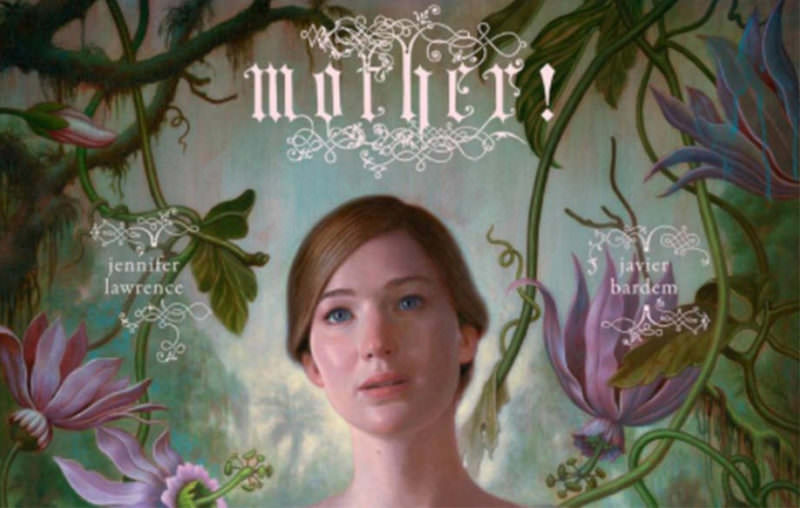 Baby reacts with anger this one time over the broken glass heart and then proceeds to let everyone into the house. Two sons show up, surprise, they are Cain and Abel. One is jealous of the others inheritance and surprise surprise, he kills the other brother with the doorknob broken off the door where the forbidden glass heart was. Hence, Eden, the forbidden fruit, woman tempted man, she broke the heart, god gets mad, the doorknob from the garden of Eden kills one of the sons.

By now, I appreciated the fact that this was a different film done differently. A good deal of critics found the film intense, many people got up and walked out of the film during the screening. I did not. But for a different reason. I wanted to see if there would be some twist to the story, something that felt less like biblical plagiarism and more like an original story. The film had this very claustrophobic style. All shots were in closeup. If you are into Jennifer Lawrence and think she is the most beautiful, best actress around, then this is the film for you. Darren Aronofsky fans who thrilled on Black Swan may be less than impressed and slightly disgusted. I thought Black Swan was an incredible film, but that was seven years ago. If I could sum up my middling review on the film, it would be that it was just too obvious. Also, I have to agree that marketing the film like it was a horror film was a huge mistake. There are scenes in the film that are horrific, but it is not a horror film.